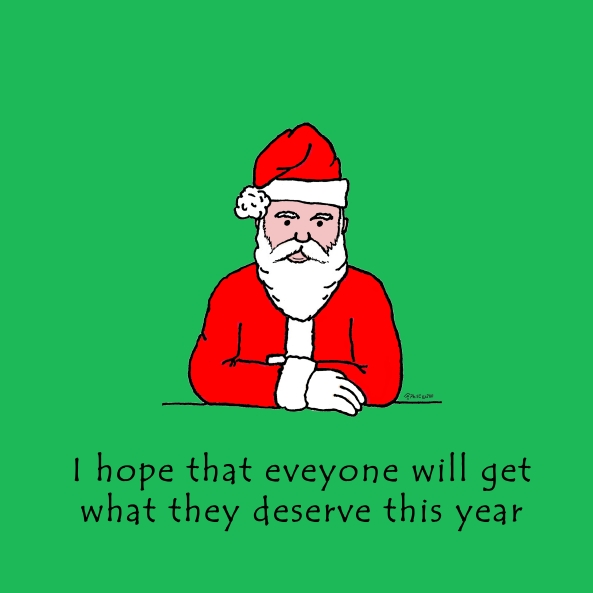 The holiday season is upon us once more with all the bright lights and gaiety that transforms drab city streets into wonderlands of festive excitement. Young children wait early for the jolly old elf to shimmy down their chimneys with sacks of toys and goodies. The world is a happy place during this end of year celebration. But wait a minute … it wasn’t always this way.

It’s not about presents; it’s about daylight.

To properly understand the evolution of this holiday season we have to go quite a ways back to a time when things were a whole lot simpler to comprehend: the Neolithic.

Queeg, elder and spiritual leader of his people, has been getting increasingly uneasy with each passing day. It seemed to him that the sun, that giver of life, was waning with great speed. In the daily battle between the giver of light and the forces of darkness, the dark side was winning. The days got shorter and shorter with the passage of time. This was not sustainable on the long run.

Instinctively, Queeg knew that he had to do something, but what? He called a council of elders and the conclusion was that they needed an analysis. In due course, the consulting team of Moog, Moog, and Darren was retained to study the ever growing loss of sunlight. Moog, Moog, and Darren went back to their hovels and devised a linear progression model to project the rate of sunlight decay and the likely result. They inputted the data onto to their sTablets (“s” stood for “stone”), and the consultants rushed speedily back to Queeg with disturbing news. Based on their linear progression analysis, they predicted that within a matter of months the sun would lose its battle with the dark side and the Earth would be plunged into eternal darkness.

Alarmed with this report, Queeg called another emergency meeting of the elders and tough decisions had to be made. The gods had to be appeased in order to stop this headlong descent into the black pits of despair. But what would appease the gods on such a life or death matter. With great sadness, Queeg and his fellow elders realized that nothing short of virgin sacrifice would guarantee a positive result. This was done and, the next day, something miraculous occurred.

The gods had been appeased and the days started getting longer. It wasn’t a startling change, but everyone knew that they had enjoyed a slightly longer day. This was cause for great celebration and everyone was in a festive mood; except, of course, for the virgins who were sacrificed for the greater weal. However, their names were honored and the dancing, drinking, and general cheerfulness of the people convinced Queeg and his council that they had done the right thing.

Over time, virgin sacrifice gave way to other celebratory offerings (to the great relief of current virgins).

Eventually, this came to be called the Winter Solstice. Every culture has it. It is a time for celebration and festivities. Ours happens to coincide with Christmas.

If you want to persist in the belief that a single tiny elf can circumnavigate the entire globe dispensing merchandise to almost two billion children in the span of a single evening using only carbon-based organisms for propulsion, go ahead. However, there are those of us who have questions such as:

Does he have an airworthiness certificate for that sleigh?

Have animal rights groups ever really examined the welfare of the reindeer?

Just how did he get personal information, including how they behaved over the year, on almost two billion children?

Who exactly is funding this escapade? As we found out in Watergate, you have to follow the money.