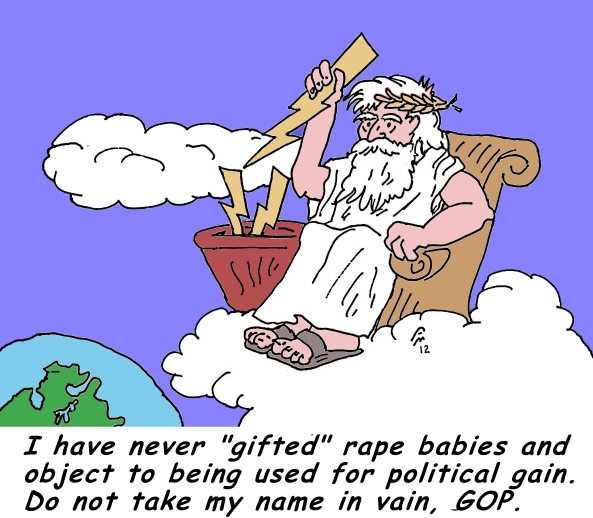 “Thou shalt not take the name of the LORD thy God in vain; for the LORD will not hold him guiltless that taketh his name in vain.” (Exodus 20:7, King James Version)

Simply put, I believe that this commandment clearly states that one should not misuse the name of the Lord to gain an advantage in a secular discourse.  I will admit that I am not particularly religious, but I do believe that using God to justify a political position would be abhorrent to most people in the Judeo-Christian world.

Saying that God “gifts” rape babies or that it is God’s “intent” that a baby should be born out of rape is blasphemy in my view, and I believe that most people would agree.  The Republican position on this matter is offensive and I hope everyone remembers on November 6, 2012, that it is not just one or two of them that say it to justify their party’s platform that abortions will be made illegal without exception.  Too many of them espouse this atrocious claim for the rest of us not to notice.  Make sure your VOTE is heard on November 6th.