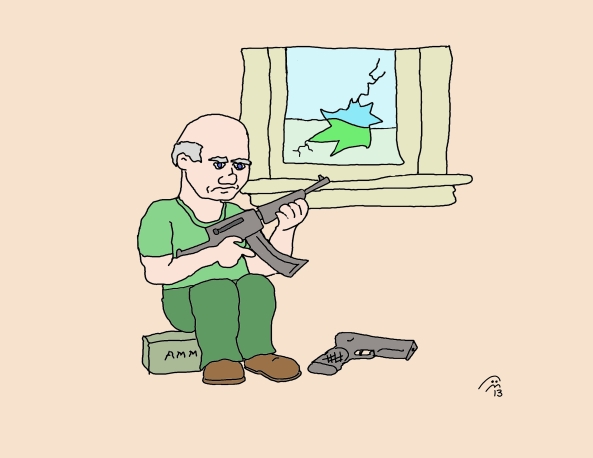 Given the stated belief by many vocal gun advocates that the reason they hold the Second Amendment so close to their heart is that it is the last defense against a government takeover, I have often wondered exactly what that meant.  As a novelist, I wanted to explore what would likely happen should the government decide that a particular weapon was illegal and therefore ordered that they be turned in to authorities.  The following account is not real, it is a literary exercise.

However, it is based on the all too familiar police standoff that we see on the news (including the one unfolding in Alabama as we speak), written accounts or official reports of such incidents, and partially on my personal experience as a trial attorney required to serve court papers on a known “gun enthusiast” and the process that the local sheriff’s department and I had to employ to avoid a potentially deadly confrontation.

At some date in the theoretical future, public broadcasts on the radio, television, internet, and through freely distributed leaflets will announce that the government orders gun owners to voluntarily turn in their semi-automatic assault style weapons (“assault rifles”) along with any clips capable of more than ten rounds (“large clips”) which have been deemed illegal for private ownership.

You ignore those announcements and become increasingly incensed about this unconstitutional intrusion into your personal freedom.

You are known to be a strong Second Amendment advocate by local authorities.  The Sheriff of your county keeps a list of known “gun enthusiasts.”  The first contact will likely be a call from a Deputy asking you if you were aware that federal regulations now require that you turn in assault rifles and large clips.  You respond that you don’t know what they are talking about, thinking that they couldn’t possibly know what you have, but they do.

Within a week of that telephone call, you receive a letter from the Sheriff’s office requesting that you come down to the office along with your assault rifles and large clips for surrender.  You throw that letter into the trash.

About two weeks thereafter, you receive a “final notice” from the Sheriff’s office stating that unless you make an appointment to turn in your assault rifle and large clips by a set date, a warrant will be issued by a court of competent jurisdiction for your arrest on federal weapons charges, i.e., possession of an illegal weapon(s) and ammunition clips.

You throw that “final notice” into the fireplace.  Your wife expresses her concern and asks if it is worth it. You tell her to mind her own business.

Because of your lack of response to these letters, two Deputy Sheriffs are dispatched to your house.  They put on armored vests and follow appropriate procedures in approaching the door.  The two stand to the sides of your front door and announce that they have a warrant for your arrest.

Your response is a blast from your Glock through the front door.  You have just made a very serious mistake.

The deputies retreat.  You exalt in winning the first “skirmish.”

Within hours, your house is surrounded by armed police officers and the urban Strategic Weapons Assault Team.  Your nearby neighbors are ordered to evacuate.  Some are interviewed about your habits and all possible escape routes.  Your neighbors freely cooperate because, quite frankly, they are tired of your rants about the government and are afraid of the arsenal that you have assembled in your home.  They tell the authorities that they believe your wife and two young children are in the house.

Several SWAT members take up strategic positions around your house; they are trained snipers who pride themselves in one shot – one kill.

The incident commander tries to communicate with you using your telephone numbers or through a bull horn that you should exit your house with your arms in the air.

You respond with a volley from your Bushmaster AR-15 style rifle.  You have now just made your second fatal mistake.

The area is awash with red and blue lights from the patrol cars, and the sounds of helicopters both official and news hovering in the vicinity of your home.  The piercing screams of sirens from police and ambulances streaming into your neighborhood add to the excitement.  You turn on the television and all the networks including cable news are broadcasting your standoff minute-by-minute.  The scene is thrilling and you get an adrenalin rush.

The incident commander tells you to let your family leave.  You respond with obscenities and another blast of gunfire.  You are really showing them!

Despite all efforts to get you to either surrender or, at least, release your family, you hold steadfast.  Your wife pleads with you to give up, the children are crying.  The incident commander can hear all of this via sound equipment that picks up vibrations on window panes.  They know everything that is being said among the people in the house.

The incident commander orders a robotic scout vehicle to be introduced into your home.  This small remotely controlled vehicle is no bigger than a toy car and can climb stairs and send back sound and video to the incident commander.  You fire multiple rounds into the robot destroying it, but by then the police know how many people are in the house and have a snapshot of where everyone is.

While you are angrily responding to these intrusions into your private space, your wife slips out the back door with your two children.  They are swiftly taken away from the house and put into ambulances and examined by EMTs and detectives.

You are now alone.

Through their interrogation of your wife, they determine approximately how much ammunition and what weapons you own.  They verify that you were never in the armed services and learned weaponry on your own.  This alarms the police, because they would much rather deal with a trained military man or someone who learned his weapon handling through a disciplined program.

Angered by your wife’s betrayal (for leaving), you return to the second story window and release another volley of semi-automatic fire.

Now that there are no hostages or other innocent people in harm’s way, the incident commander orders the standoff to end and police snipers take their positions.

A SWAT member lobs in a tear gas grenade.  The acrid smoke and irritants cause you to go to an open window for air.  The gas mask that you purchased recently proved to be a cheap Asian knockoff that was essentially useless.

When your head is seen in the window, the SWAT sniper squeezes off one round.

One shot – One Kill.

3 comments on “How It Will Go Down – PLEASE SHARE”

Top 10 of Anything and Everything
T. Gene Davis’s Speculative Blog