A data mining project called, Floating Sheep, produced an interactive map of  “post election racist tweets” with some interesting results that on reflection may be more scary than interesting.  You can access the interactive map by hovering over and clicking on the following image. 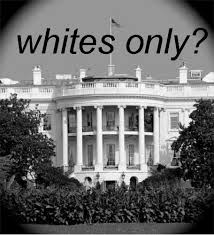 Lawrence Wilkerson is a retired military officer who fought  for our country, former chief of staff to Secretary of State Colin Powell, a visiting professor at the College of William & Mary  in Williamsburg, Virginia, a white man, and a long-time member of the Republican Party.  He has something to tell you.

The only way the GOP will realize that they betting against the tide of history is to lose this and all elections big time, until they realize that the Party of Abraham Lincoln should not discriminate.

VOTE ON NOVEMBER 6 AND TELL THE REPUBLICANS THAT IT IS NOT CORRECT TO CATEGORIZE PEOPLE ON COLOR ALONE.

Between the two people in the above photograph?

Except that the guy on the left has it on his tee-shirt and the guy on the right, a chief Romney surrogate speaking for the GOP, says it on national television and cable.

We have come too far in the last sixty years to let Mitt Romney and his party take us back to the “good old days.”

PLEASE VOTE AND GET YOUR FRIENDS AND NEIGHBORS TO VOTE ON NOVEMBER 6.  LET THE GOP KNOW THAT IT IS NOT RIGHT TO GO BACK TO THE “GOOD OLD DAYS.”

Of course, in the grand old tradition of the Grand Old Party wherein they say what is really on their mind, then immediately retract the statement and apologize, Sununu later retracted his claim that Powell was only supporting Obama because he is black.

All of the Republicans have done this from Akin to Mourdock to Romney, himself.

Remember what Mitt Romney said about the 47 percent and his later “apology?”  This tactic is so obvious and is so tacky.  But then, the GOP seems to be stuck in the Fifties and all that entails don’t they?

Get the real message you want out first, and then “apologize” for saying it.

GET OUT THE VOTE ON NOVEMBER 6TH.

deny their racial heritage?  And how is that important in our society both historically and now.

This is me.  I was born in China, but grew up in Washington, D.C., in the fifties and sixties.  Washington at that time was at the cross roads of Southern institutionalized discrimination and Northern false hope.

To certain ethnic groups like African-Americans and Native Americans, the challenges were daunting.  African-Americans, in particular, were officially discriminated through laws that forbade them to use certain facilities or even drink from certain fountains.  Native-Americans, likewise were castigated as lazy, drunken human flotsam that were rejected from many opportunities and were kept away from mainstream society in reservations living a life of neglect and abject poverty.

Asians suffered a nuanced form of discrimination.  While no placards shouted out that we could not use certain facilities or drink from certain fountains, I characterized discrimination as being delivered on a more personal basis – by one redneck at a time.

I have no doubt and even know of situations growing up where I was denied certain things because of who I was.  Does it make it right to say that no official discrimination existed against Chinese.  Makes one feel good doesn’t it?  Not to the the one who was spat upon, denied positions, excluded from activities, or otherwise relegated to lesser roles.

People often ask me what my nationality is.  I have been mistakenly identified as Jewish, Italian, Spanish, Mexican, African-American (I darken a lot in the summer), and other races; even by other Chinese.  The above is a picture of me as a young man.  Very few say that I am Chinese and some ask why I make a big deal about being Chinese.  In other words, why don’t you shut up and pass as non Chinese.

I grew up in the fifties and sixties; it was tough growing up as a non-white in America at that time.

Now imagine that we lived in the early 1900s, say 1920 – 1940, when racial distinctions were at their height.  When skin color was the overwhelming distinction that define where you could live, what job you could have, who you could marry, and even how you could die?  Imagine you knew that the American “one-drop” rule meant that you were defined by the faintest trace of non-white blood, whether you were black or Native American.

Imagine that you knew that you had ancestors who were Black or Native American, direct or many generations back.  Imagine that you wanted your children to make it in a world that was so quick to judge a person on that “one-drop” rule.  What would you do?

Imagine that the one drop did not show up anywhere and your children appeared for all intents and purposes white.

You would do exactly what Elizabeth Warren’s parents did.

You would obfuscate, you would hide your ethnicity, you would not tell anyone.  Until your child asked about your family and you knew that it was important to let them know that the Native American blood coursing through their veins was evry bit as proud and important as the West European drops that hid their Native American traits.

That doesn’t mean that you hurried down to the county courthouse to make sure the records reflected your child’s heritage, nor did you run to the tribal council (wherever that might be) and document the tribal connection.  This was the 1940s and 1950s after all.

In the 1950s, McCarthyism and xenophobia was rampant in our land.  Monsters inflamed by racial hatred were fervently attacking African-Americans and Native Americans.  Why in hell, would you as a parent want to expose your child as being different.  After all, she could easily pass as white and even the Native American blood that coursed through her veins wasn’t that much.

It is racist that this matter has become such an issue in the Senate race in Massachusetts.  I am only sorry that I do not still live in the Commonwealth of Massachusetts, because I would surely be voting for Elizabeth Warren on November 6, 2012.