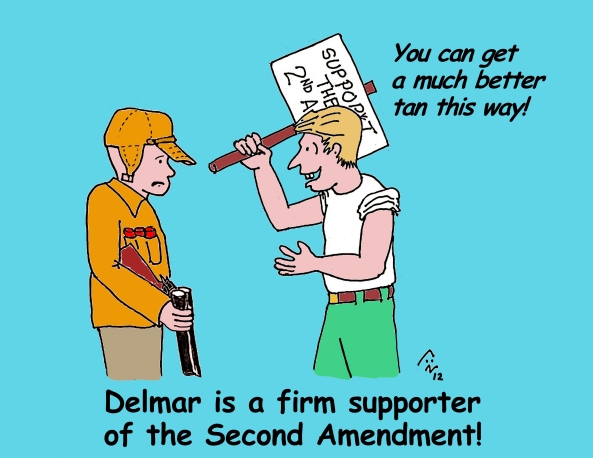 The Constitution of the United States of America does not give you the right to grab an automatic or semi-automatic assault weapon and wreak havoc on your fellow citizens.

In fact, until the Supreme Court of the United States was packed with conservative justices by George H.W. Bush and his son, the Court had long held that an individual citizen’s right to possess firearms was not a Constitutional right, unless that individual was part of a state militia.

The Second Amendment to the Constitution of the United States of America clearly states:

“A well regulated Militia, being necessary to the security of a free State, the right of the people to keep and bear Arms, shall not be infringed.”

If you take out both modifying clauses and reduce the Second Amendment to its essence, it reads: “A well regulated Militia, …, shall not be infringed.”

Both phrases: “being necessary to the security of a free State” and “the right of the people to keep and bear Arms“, are modifiers of the term Militia and are not the primary intent of the Second Amendment.  Any grammarian can see that, you don’t have to be a Constitutional Scholar.

If one reads the legislative history of the Second Amendment (to non-lawyers, “legislative history” is the collection of all drafts, written statements, debates, etc., of a piece of legislation taken as a whole) it becomes abundantly clear that the intent of the framers of our Constitution was that the Second Amendment was meant to facilitate the maintenance of “a well regulated Militia.”

If I may paraphrase the Second Amendment, it says that your right to bear arms is sacrosanct as long as you are part of a “well regulated Militia.” So if you want to bear arms freely, I believe (with some knowledge of Constitutional law) that you should join a well “regulated” Militia or the National Guard.

While I agree that there are many who would disagree with my view, I firmly believe that just as many if not more of my fellow attorneys would agree with this reading of the Constitution’s Second Amendment.

Why did I mention the last two Republican presidents?

When the first opportunity arrived, the newly conservative court held in a narrow 5-4 decision that the District of Columbia’s gun control law was unconstitutional.  Four justices dissented (District of Columbia v. Heller, 554 U.S. 570 (2008)) and agreed with Justice John Paul Breyer’s dissent which reiterated what had been the law of the land for years relating to the fact that the right to bear arms was pursuant to the maintaining of a well-regulated militia. A good article on the history of this topic can be found in http://www.loc.gov/law/help/second-amendment.php

On an ancillary, but connected point, conservative justices brought forward the concept of “Originalism.”  Simply put, Originalism is the opinion that all Supreme Court cases must be decided in accordance with what the framers of the Constitution wanted as evidenced by their own thoughts and writings – even though the matter might not have existed or was even conceived in all of humanity during the framers’ lifetimes.  But even with this specious “theory,” one would have to read legislative history to glean what you can from the Framers’ writings on their intent for the Second Amendment.  As I stated above, the Second Amendment is clear.  You need to be part of a State Militia to possess weapons.

I fail to understand why noted legal scholars of Originalism, such as Antonin Scalia, cannot see this.

It is time to correct this anomaly and put clear thinking justices on to the Supreme Court.

Note: This article was previously published on this site.  This is an updated version.  The writer is an attorney who did pretty well in his Constitutional Law class.

2 comments on “There Is No Rambo Clause In The Constitution”

Top 10 of Anything and Everything
T. Gene Davis’s Speculative Blog